General facts and figures of Bogota (2021) 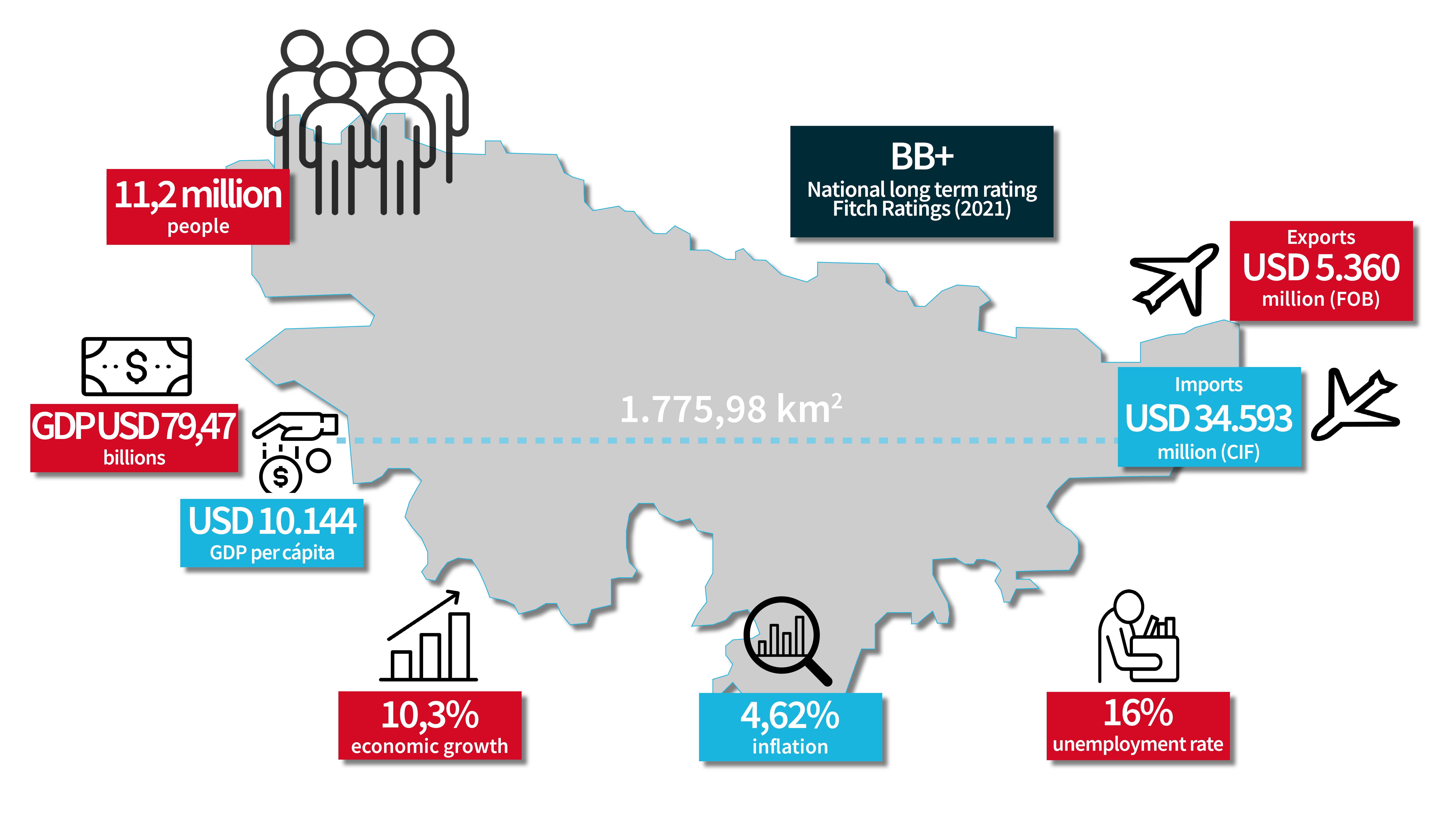 1 Process Invest in Bogota based on DANE, Regional accounts, GDP current prices. This calculation includes services such as: electricity, gas and water services; trade, restaurants and hotel services; transportation, storage and communication services; financial, real state and insurance; social and personal services; professional services and artistic activities, entertainment and recreational services.
2. Share of export and import of Bogotá and Cundinamarca in Colombia´s total export and import. Invest in Bogotá process based on statistics of international trade of DANE.
3. Bogotá Chamber of Commerce Observatory. 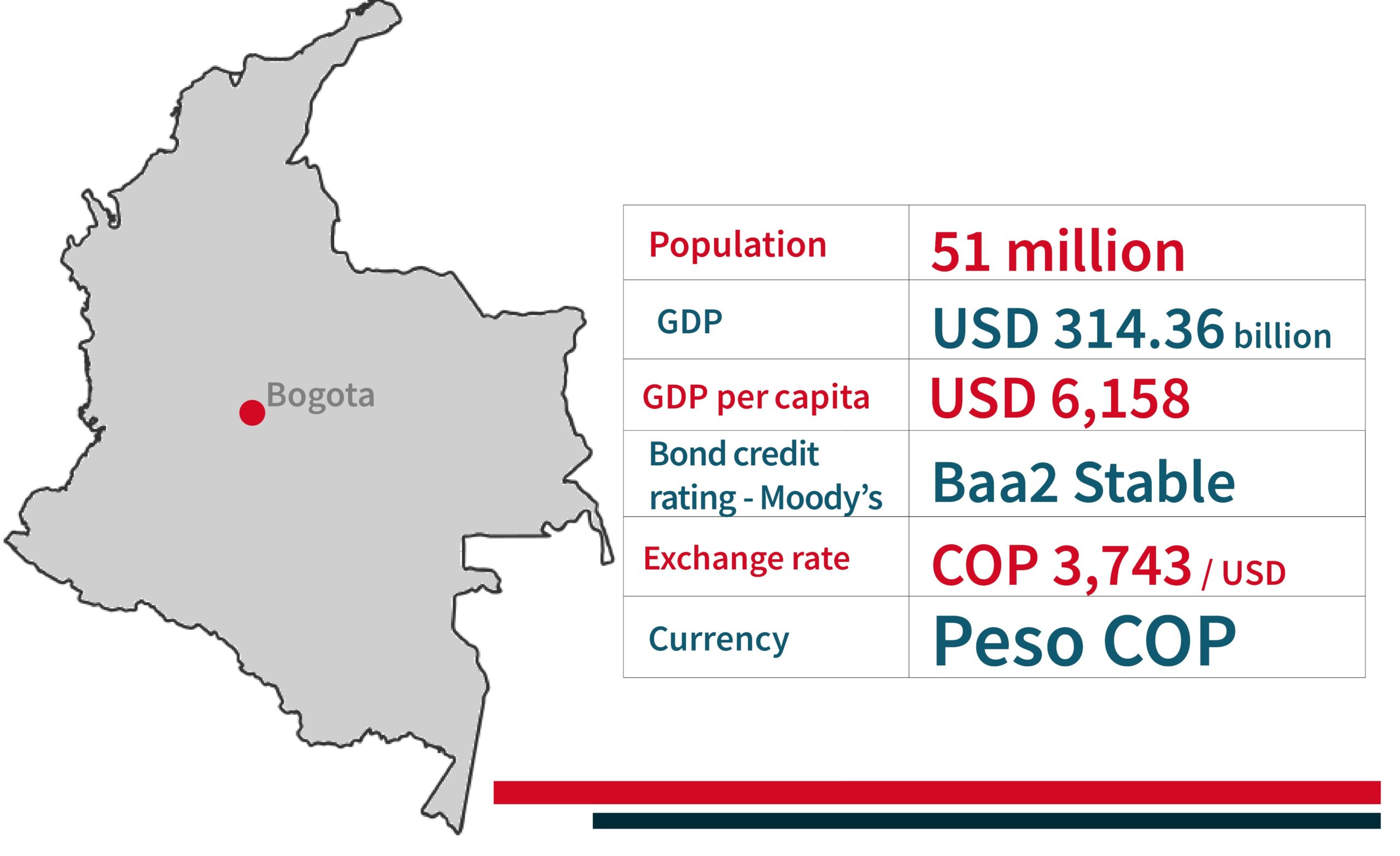 One of the main attractions of Bogota is its privileged geographical position. Located in the center of the Continent and the country, the capital has an area of 1,775.98 km2 and offers a whole range of international connections. El Dorado airport is the first airport in Latin America to be recognized in the Covid-19 airport security classification with 5 stars, due to its high standards of cleaning and disinfection, best hygiene practices and compliance with biosecurity protocols. In addition to being the first airport in the world to be certified as a Leed Platinum building in operation and maintenance of existing buildings, version 4.1, awarded by the U.S. Green Building Council.

Bogota-Region represents a market of over 11 million people, equivalent to 22% of the nation’s population (50.37 million in 2020). Its strong and diversified economy explains why it makes sense to invest in Bogota.

The metropolitan Bogota Region exported USD 5,360 million (FOB) and imported USD 34,593 million (CIF). In addition, the number of companies with foreign capital that have decided to start operations in Bogota has increased by more than 200 in the last ten years; in 2021, a total of 1,295 foreign companies set up their operations in the city.

The strength of Bogota’s economy is evident in its dynamism. During part of the last decade, the city’s average economic growth was higher than that of Latin America. In 2021, the economic region grew by 10.3%, while Latin America was growing around 6.2%.

The city’s solid economic performance is reflected in the outstanding stability of its prices. Bogota has one of the lowest inflation rates among the most important cities in Latin America. In 2021, inflation was 4.62%, below cities as Buenos Aires and Rio de Janeiro.

Bogota Region is a business-friendly city that offers investors one of the best entrepreneurial environments in Latin America. According to the latest World Bank analysis, Bogota is the third city in Latin America for easiness in conducting business.

Flows of foreign direct investment (FDI) to Colombia have performed remarkably well throughout the last decade, reaching an all-time high of USD 16 billion in 2013. 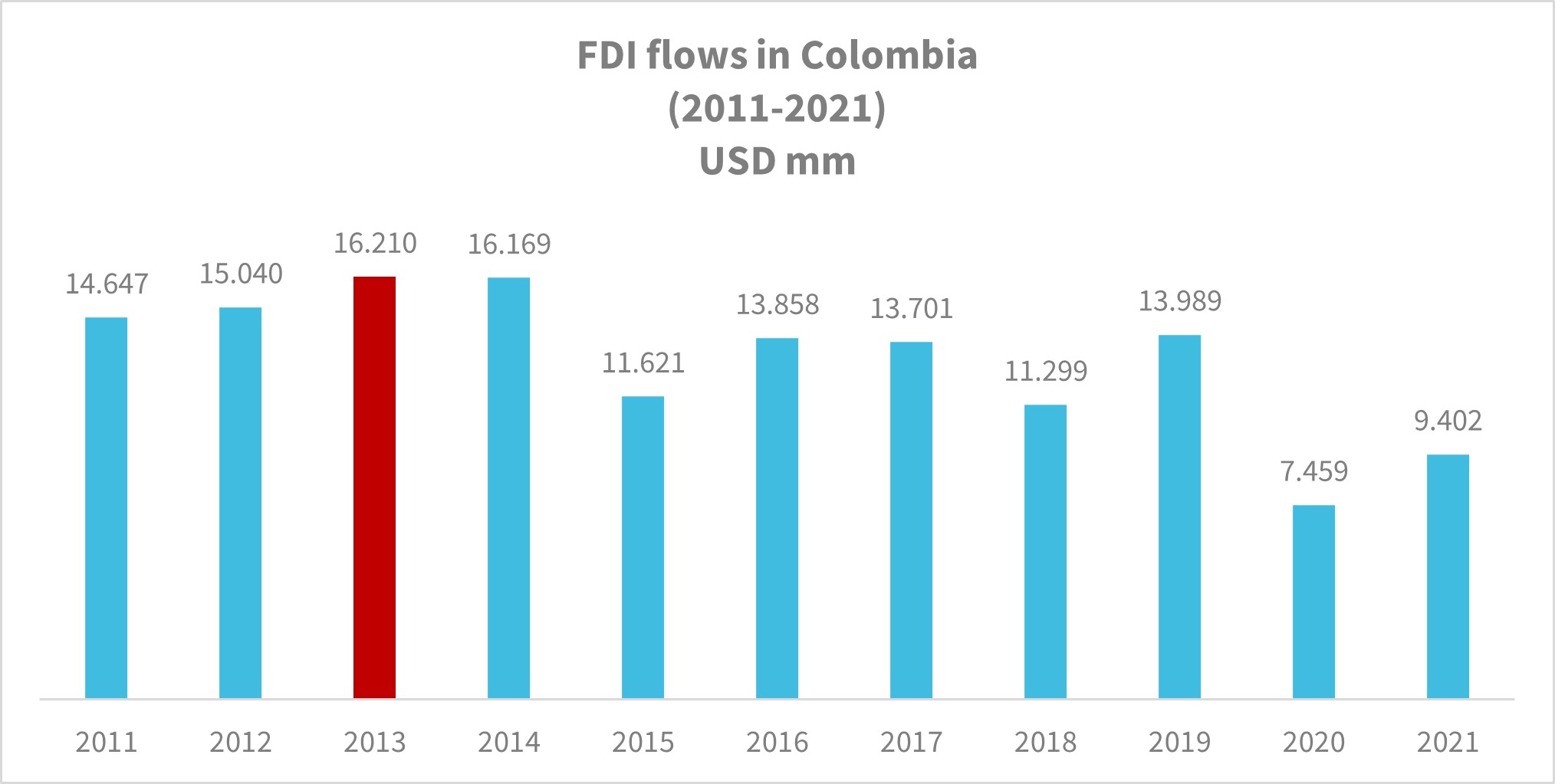 In fact, according to investment trends, Colombia is one of the largest recipients of FDI in Latin America, which sets it as one of the best countries to invest in the region. 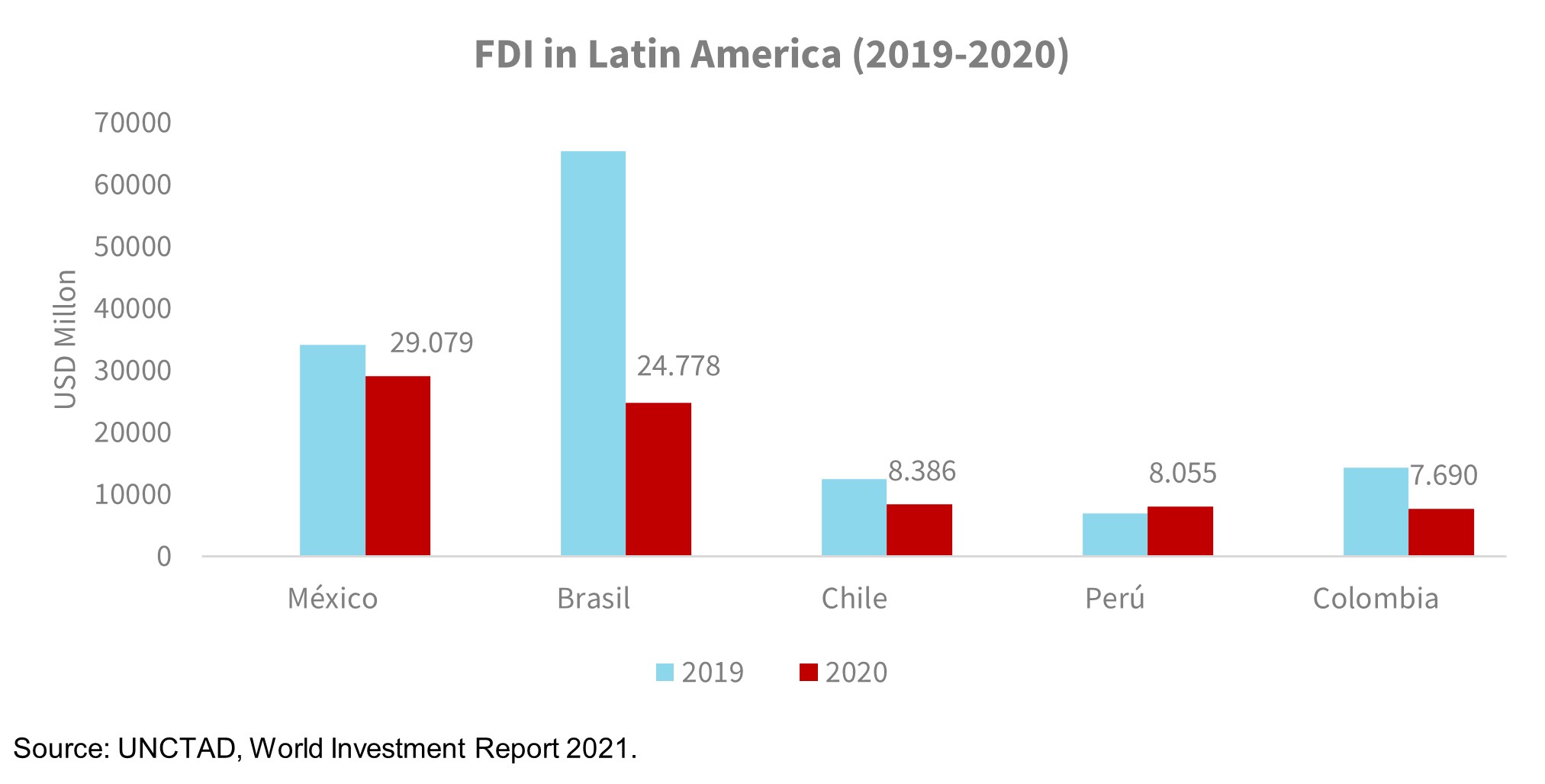 Thanks to trade liberalization measures, Colombia’s foreign trade reached more than USD102 billion in 2021. In that year, trade in the country increased by 37% and reached higher levels than in 2019, evidencing Colombia’s rapid economic recovery after Covid 19. 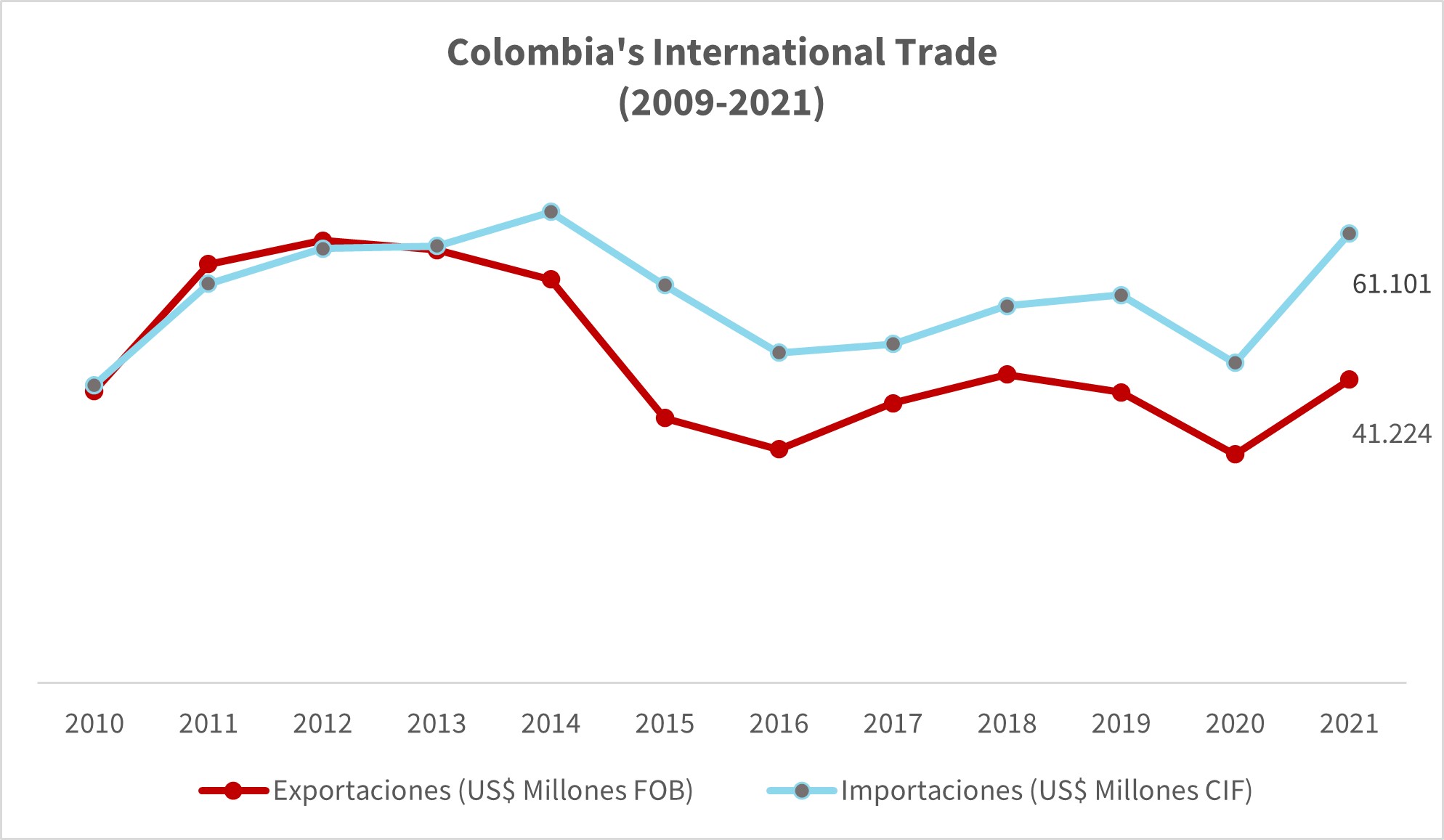 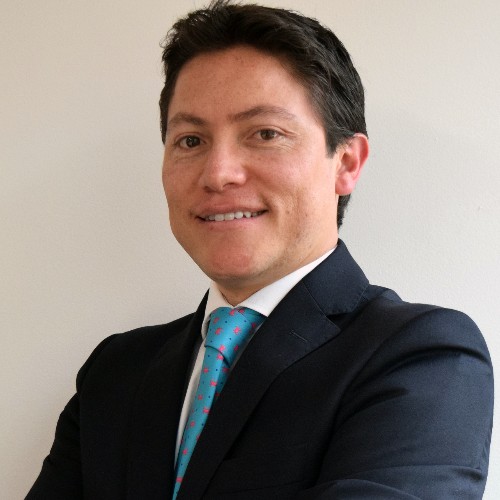 Business Climate in Colombia and Bogota-Region

Quality of life in Bogota